The public is always welcome for United Republicans of Harris County general meetings.  In recent months, these meetings have turned into much anticipated events.  Please RSVP to secure your seat.  Admittance and parking are free. Posted by Karen Townsend at 9:04 AM
Email ThisBlogThis!Share to TwitterShare to FacebookShare to Pinterest

From the inbox, an email from Republican Party of Texas Chairman Steve Munisteri.  He reports on the Keep Texas Red effort by Texas Victory on March 29th.  Here are some excerpts.  There is even a little humor at the end.

The Texas Victory effort kicked off in full swing on March 29th (earlier than ever before) to Keep Texas Red. Almost 1,000 volunteers showed up in 11 different cities to start block walking.  Together, we knocked on 10,000 doors, identified 975 new volunteers and collected 3,176 new IDs.  All of this 8 months before Election Day.  We can't wait to see the intensity our volunteers bring come September! 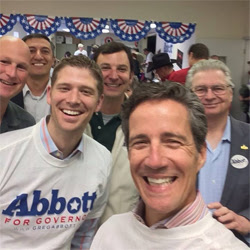 For the first time ever, we block walked with an app! You read that right; the Republican Party of Texas used technology!  All jokes aside, the new app worked great and we received positive feedback from our volunteers who found it easy to use and much more convenient. In fact, the app worked so well, we will be rolling out the new software statewide in the coming months.
Our volunteers were joined by our Republican elected officials around the state.
The turnout in Harris County was also very impressive as Representative Dwayne Bohac volunteered his time to come speak to the block walkers.
Muchas gracias a todos los voluntarios por su presencia, el apoyo hacia el Partido Republicano, y por ayudarnos a difundir el mensaje conservativo. We provided breakfast, lunch and a free t-shirt to all of our volunteers.We worked really hard to get pictures of all of these elected officials chowing down on the breakfast too but they downed the tacos before we could unlock our iPhone's.Do not fear, we will try to get embarrassing photos again on April 12th when we have our next Keep Texas Red statewide block walk. We will be using our awesome app (technology!) and continue to work to keep up the momentum to make sure Texas doesn't spiral out of control like Wendy Davis' campaign.

During the monthly meeting of Memorial West Republican Women PAC, we heard from Carlos Guerra, representing the RPT for Hispanic Outreach.  He distributed information on the upcoming Harris County Victory Call to Action which takes place Saturday, April 12, 2014.  This is part of a coordinated effort among Republicans across the state.  The goal is to knock on over 60,000 doors in just one day.

Republicans are working harder and smarter to Keep Texas Red.  Join in the fight.

Posted by Karen Townsend at 8:41 AM
Email ThisBlogThis!Share to TwitterShare to FacebookShare to Pinterest