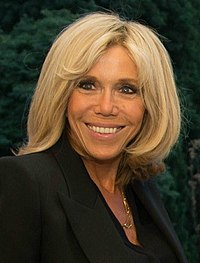 Athletic gear company Reebok trolled President Trump this weekend over Trump's alleged remark to the French president's wife. It is reported that Trump complimented Brigette Macron by saying, "You're in such great shape....beautiful." Reebok took to Twitter and social media to lob a politically correct response. As you may imagine, Trump supporters and non-supporters have a little something to say about it.

For a little background on Mrs. Macron - she enjoyed a long career as a literature teacher at an elite school in Paris. Age 64, she first met her husband, age 39, when he was a student in her class. The school was a Jesuit school, by the way. She retired from the classroom to help her husband run for the French presidency. She tried her hand at politics in 1989 when she ran as a candidate for city council but she was not successful. She divorced her first husband in 2006 - with whom she has three children - and married Macron in 2007. She is pretty, petite, and yes, in very good shape. 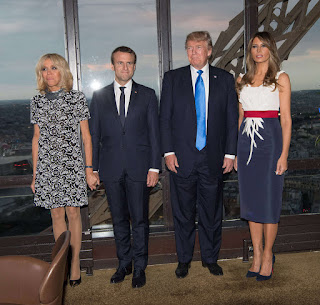 Reebok took to social to virtue-shame the president, as those concerned about political correctness above all common sense are prone to do. Here is what appeared on Twitter: 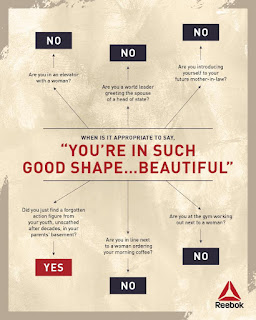 It's all a bit too silly. Is anyone really surprised that Trump would make a remark like this? Of course not. Was it wildly inappropriate? Maybe. Was it worth a day or two of commentary? No. It's just another distraction. She wasn't an employee of Trump's and they were both in the company of their spouses. No long term damage has been done and, if truth be told, she probably enjoyed the compliment. What 64 year old woman wouldn't enjoy it? The phony outrage machine churning up once again to make the left and other sore losers from November (the American media, in particular) feel superior has produced a definitive result - regular Trump supporters no longer pay any attention to the noise.

This is how we got Trump in the first place. If this sort of silliness continues, his second term as POTUS will be guaranteed.

Posted by Karen Townsend at 1:14 PM
Email ThisBlogThis!Share to TwitterShare to FacebookShare to Pinterest