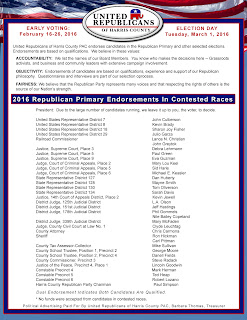 The endorsements in contested Republican primary races are out from United Republicans of Harris County.  Here they are:


United Republicans of Harris County (URHC) does not take payment in exchange for endorsements from candidates.  URHC Board of Directors spend many hours voluntarily researching and interviewing all contested GOP primary races.  Interviews are conducted with all Republican candidates wishing to secure the endorsement of URHC - both by questionnaire and in person.


Early voting is February 16, 2016 to February 26, 2016.  The primary election is March 1, 2016.
Posted by Karen Townsend at 2:43 PM
Email ThisBlogThis!Share to TwitterShare to FacebookShare to Pinterest

Marco Rubio Expresses His Faith In The Most Compelling Way Possible

In a recent campaign stop, GOP presidential candidate Sen. Marco Rubio was asked a question about faith and governing by a young voter professing to be an Atheist.  Showing grace and compassion, Rubio gave a compelling answer.  Faith guides many of us when we head to the polls to vote.  Here is why that is important:

Beautifully explained with real sincerity, this candidate doesn't pander for votes using his faith.  He simply lives his faith and leads by example.
Posted by Karen Townsend at 10:46 AM
Email ThisBlogThis!Share to TwitterShare to FacebookShare to Pinterest