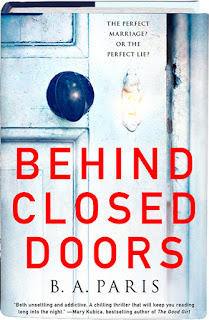 Available in the U.S. on August 9, 2016, Behind Closed Doors written by B.A. Paris is a good choice for a late summer read.  If you are looking for a page turner of a piece of fiction, this may be your best bet.

Paris' first published novel, Behind Closed Doors is a dark thriller of a story about a newlywed wife held hostage by her domineering, sadistic husband.  A successful lawyer in London, Jack Angel is, in fact, too good to be true.  He swept Grace off her feet and after initial hesitation, she left a career of her own to begin a new life with Jack.  He built a beautiful home for them just outside of the city and as they honeymooned in Thailand, the truth began to emerge.

Grace is left guardian of her mentally disabled younger sister, Millie, when their parents move to New Zealand.  Millie lives in a group home and when she turns eighteen, she ages out of the arrangement.  Grace convinced Jack to arrange for Millie to live with them when the time came.  As the story develops, Jack makes it perfectly clear that he intends to inflict the same abuse to Millie as he does to Grace herself.

I won't give away the ending but you will not be disappointed.  This novel keeps the reader's interest from the first chapter and is a fast read.  It makes for a great summer's distraction for any reader.  Already a bestseller in the U.K. (with the movie rights sold) , Behind Closed Doors will be available on August 9, 2016 in the United States.

*Full Disclosure*  St. Martin's Press sent a free Early Readers Edition to me in exchange for a written review and social media publicity.
Posted by Karen Townsend at 4:32 PM
Email ThisBlogThis!Share to TwitterShare to FacebookShare to Pinterest

From the Wall Street Journal:

Mr. Cruz’s sudden burst of “conscience” would be more believable if Mr. Cruz hadn’t played Tonto to Mr. Trump’s Lone Ranger for most of the primary campaign. When it mattered last year, when Mr. Trump still might have been stopped, Mr. Cruz was lip-syncing the businessman’s lines.
While other candidates were opposing Mr. Trump on immigration, Mr. Cruz was imitating him and even moving to his right. Mr. Cruz wrote an op-ed in this paper with Paul Ryan supporting trade promotion authority. After Mr. Trump opposed it, Mr. Cruz came out against the bill right before the Senate vote.

If nothing else, the utter hypocrisy of the Cruz stream of conscience is suspect, given the introduction of the assaults on Melania Trump's character alone laid at the feet of the Cruz campaign.  The pictures of Mrs. Trump from her modeling days are everywhere in the Internet universe and were indeed used by Cruzers.  Using an unflattering photograph of Mrs. Cruz and a tweet from Mr. Trump implying he might mention her past troubles was his response. To clutch pearls and act as though that isn't anything other than ordinary behavior in today's politics is a bit much.

Senator Cruz also noted the silly accusation that perhaps his father, a Cuban immigrant, was somehow involved in the assassination of President Kennedy.  That was bad form coming from a tabloid grocery store rag - hardly an unusual occurrence. Trump says he had nothing to do with that story. It's politics, it's as old as time.

Describing these incidences as just too brutal, Cruz decided to not honor the RNC pledge made at the beginning of the primary campaign season - each candidate agreed to support the eventual Republican nominee in exchange for access to the RNC databank.  Senator Cruz now claims he's entitled to be a sore loser with hurt feelings as the voters hold him accountable for his less than gentlemanly behavior.

The reality is this:  Cruz lost this race and his ego is bruised.  He is a bitter man who is a divider, not a uniter.  He will always put himself over the Republican Party and rely on supporters who are perfectly ok with that.  He will rely on blind support as he calls other Republicans "cartel" members - drug lord thug talk - and think that is bold behavior.  It is not.  It is boorish and juvenile.

Cruz though he'd receive the Republican nomination by pandering to the evangelical voters and those more loyal to him than to the Republican Party - the newbies, the people not familiar with the party system or the workings of the RNC, those looking for an outsider.  Does anyone really think someone who has been working in and around Washington, D.C. and Austin Texas since 2000 is an outsider?  No.  Cruz was caught off guard by two real outsiders - Dr. Ben Carson and Donald Trump.  Neither were office holders in any form.  Both from the real world of business.  (I don't include Carly Fiorina because she ran unsuccessfully for office  and also served as an adviser to previous Republican officeholders - she was a part of the system.)

Instead of focusing on working to take out Donald Trump during the primaries, Cruz chose to focus on exaggerating and misleading on the records of others - including those he called friends.  Senators Marco Rubio and Rand Paul were early targets.  He distorted their records for his personal benefit.  This, too, is politics; it is as old as time.  His conscience didn't prevent that.   He called Donald Trump his friend, a great man, and promised to "continue to sing his praises."  Why?  Cruz thought eventually Trump would drop out and Cruz would be the last man standing.  Cruz thought he'd get those Trump supporters for himself.  He was wrong.

Not only did Cruz's overwhelming support from evangelicals not materialize in a significant way - Trump bested him in many states with that group - but he soundly lost in the deep South.  Cruz was using his own Southern strategy and expecting enough early victories to put him in the lead.  Wrong again.  Though Cruz referenced Alabama Senator Jeff Sessions as a voice on immigration he listened to, especially leading up to the Alabama primary because he desperately wanted his endorsement, Sessions endorsed Trump in Alabama - the first Senator to do so.  Cruz had done his best to get to the right of Donald Trump on immigration - though in his Senate work, he tried to ride Senator Marco Rubio coattails for immigration reform, only to later deny it  - and again failed.

Ted Cruz has no success of note in his time in the U.S. Senate.  Clearly he ran for that office so that he could use it to run for President.  He had never held elected office before going to the Senate - he served in appointed positions in Washington, D.C. and Austin, Texas - and has proven he is ineffective in elected office.  Most of his failure comes from his inability to work with others - he may boast of not being a team player but that all came back to bite him.  His continued stunts for the camera to keep him in the public's eye - like the faux filibuster to shut down the government - have all been for his own benefit.

Cruz thought he could disrupt the Republican convention and somehow wrestle the nomination from Trump.  The problem, though, is that grassroots Republicans are loyal to the party, not to a particular politician.  Politicians come and go, the party remains.  The convention delegates were already well on the way to a unified front. The #NeverTrump bunch were never organized.  Those who suddenly voiced support for candidate Cruz when that was their only choice against Trump were doing so because they had no other choice, not because they truly wanted Cruz as the nominee.  They were settling.

The most amazing result to the Cruz temper tantrum, for me, has been the utter disgust leveled by previously loyal Cruz supporters.  I don't think Cruz is able to understand the depth of damage he has done to his political future.  When Cruz runs for president in 2020, does he think the Trump voters won't be there?  The party has changed because the voters have changed.  The newly energized voters - on the right and on the left - no longer trust or believe politicians.  It's a new world.

Senator Mike Lee made a fool of himself on national television, followed by former Virginia Attorney General Ken Cuccinelli, on the floor of the convention.  Lee wasn't able to make a decision to endorse either Marco Rubio or Ted Cruz during the primaries, claiming both to be good friends.  Then he endorsed Cruz when Rubio suspended his campaign.  He is hardly a voice of courage.  Libertarians have glommed on to Lee.  Libertarians are not Republicans.

Governor Pence endorsed Cruz in the Indiana primary - though he was hesitant to do so.  Cruz lost the Indiana primary and then suspended his campaign.  Pence is now the Vice Presidential candidate.  Prominent members of Cruz super PACs are now working for the Trump campaign.  Loyalty to the party is necessary and will continue.

I am thankful I could vote for Senator Marco Rubio in the Texas primary.  He is the face of the future of the Republican Party - just not now.  I am a #RubioRepublican.
Posted by Karen Townsend at 12:49 PM
Email ThisBlogThis!Share to TwitterShare to FacebookShare to Pinterest