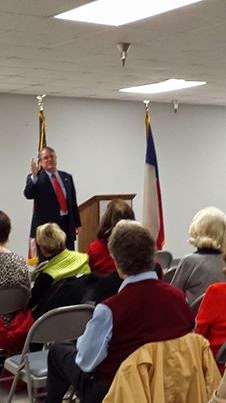 U.S. Congressman John Culberson (R-TX) was the guest speaker for the March 9, 2015 general meeting of United Republicans of Harris County.  Despite some truly dreadful weather, a room full of interested citizens gathered to hear a Washington update from the congressman.

No one left disappointed.

Congressman Culberson is an engaging, enthusiastic, humble, and knowledgeable politician.  He works a room, shaking every hand and speaking will all.  He is a happy warrior, as Ronald Reagan encouraged us all to be. He was prepared to speak about any topic and took lots of questions from the audience.

During his talk to the group, the congressman delivered two special tidbits.  He spoke about how he has figured out a very useful tactic to get desired results for conservatives in Congress, using the budgeting process.  As a member of the powerful House Appropriations Committee, he has a strong voice in the allocation of budget dollars.

He is Chairman of the Subcommittee on Commerce, Justice, and Science, or CJS. The CJS Subcommittee has jurisdiction over the Department of Commerce, Department of Justice, NASA, the National Science Foundation, and other related agencies; Vice Chair of the Homeland Security Subcommittee; and he serves on the Transportation, Housing, and Urban Development Subcommittee.

Congressman Culberson told us about using his recently discovered process of working with government officials to promote common sense, conservative distribution of monies. How does he do it?  He talks to them and persuades them.  Imagine that.  For instance, today the congressman delivered on a tidbit he mentioned during the meeting - giving the group in attendance the first knowledge of the upcoming win for Second Amendment loyal supporters - when the ATF dropped moving ahead with banning some ammunition for firearms.  Culberson met with the necessary person at AFT and provided a "come to Jesus" moment for him. He told us that after the time allotted for public comment of the bill expired, he was certain an announcement would come.  And it did.

United Republicans and supporters were the first ones to have a behind the scene glimpse into making that happen, thanks to the leadership of John Culberson.

Here is the press release I received in an email today:

Washington, D.C.—Congressman John Culberson (TX-07) today released the following statement regarding a decision by the Bureau of Alcohol, Tobacco, Firearms and Explosives (ATF) to drop a proposed ban on  the manufacture and sale of 5.56 mm/.223 caliber M855 “green tip” ammunition widely used by sportsman:

“The ATF made the right call today by reversing course on a misguided plan that would have trampled on Americans’ Second Amendment rights.“In the meeting I had with ATF officials last Thursday, I brought up the serious concerns I had  with the proposed framework – all things I had heard from my constituents.  By the end of our discussion, we had come to a consensus on how to best move forward. “This is an example of how regulators and Congress should work together.    “All of us in Texas love law enforcement and want to help ATF officers stop gun smugglers, drug smugglers and other criminals – not law-abiding American sportsman who use this ammo every day for target practice, shooting competitions and hunting.“The slippery slope of federal overreach impacts every aspect of our daily lives, and this issue is just another example of how we must be constantly vigilant in protecting the Constitutional rights of law abiding citizens.“I truly appreciate the ATF for hearing us out and commend the agency for making the right decision.”Congressman Culberson is the Chairman of the Appropriations Subcommittee on Commerce, Justice, and Science which oversees ATF funding.  In addition to meeting with ATF leadership, Culberson also signed a March 4 letter to ATF Director B. Todd Jones expressing serious concerns about the proposed ban, explaining that it would “establish an unduly restrictive standard, does not comport with the letter or spirit of the law, and will interfere with Second Amendment rights..."


The crowd was diverse in Republican political philosophy, as was shown during the reading of the presidential straw poll results.  The potential candidate who came in First Place was Wisconsin Governor Scott Walker.  A more distant Second Place produced a tie between former Florida Governor Jeb Bush and Senator Ted Cruz.


Posted by Karen Townsend at 7:51 PM
Email ThisBlogThis!Share to TwitterShare to FacebookShare to Pinterest 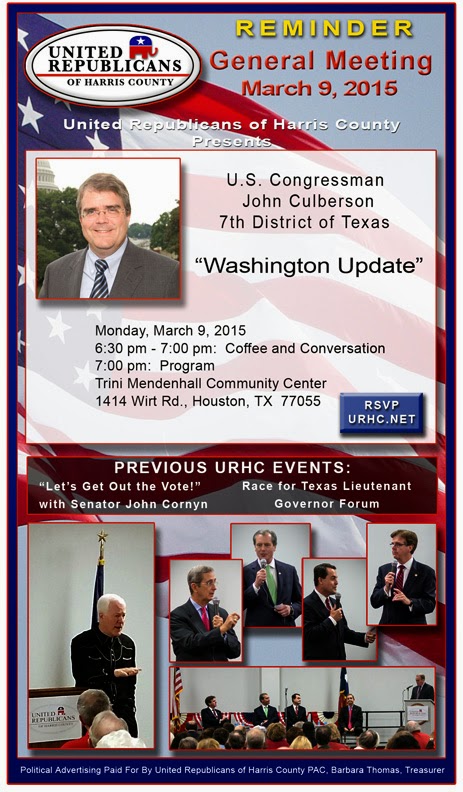 Congressman Culberson was elected in 2000 to serve Texans living in the Seventh Congressional District and is now the Chairman, the former seat  of  President George H.W. Bush and Bill Archer.

He chairs the CJS Subcommittee, which oversees the Department of Commerce, the Department of Justice, the National Aeronautics and Space Administration (NASA), the National Science Foundation, and other related agencies.  As Chairman, John is committed to ensuring that the Attorney General respects the rule of law and providing America’s law enforcement officers with the resources they need to protect our lives and property.

He serves on the all-important House Appropriations Committee, which funds the federal government.  He also serves on subcommittees - including the Commerce, Justice, Science Subcommittee, Homeland Security Subcommittee and the Transportation Housing & Urban Development Subcommittee.

The public is welcome and parking is free, as is attendance.  Come and hear the Washington Update from Congressman Culberson and bring your questions for him.

The meeting, held at the Sosa Center on Wirt Road, begins at 7:00 pm. Come at 6:30 pm for coffee and conversation before the meeting begins. Bring a friend.
Posted by Karen Townsend at 9:11 AM
Email ThisBlogThis!Share to TwitterShare to FacebookShare to Pinterest

Some Democrats in Congress and all of the Obama administration, including the U.S. Ambassador to Israel, decided to politicize the speech that Israeli Prime Minister Netanyahu  delivered to Congress at the invitation of Speaker John Boehner. They did not attend as a means of showing disapproval.

Alan Dershowitz wrote in an op-ed in the Wall Street Journal that the Democrats' decision to boycott the speech from Israeli Prime Minister Netanyahu is a breech of protocal and an indecent way to act:


Congress has every right to invite, even over the president’s strong objection, any world leader or international expert who can assist its members in formulating appropriate responses to the current deal being considered with Iran regarding its nuclear-weapons program. Indeed, it is the responsibility of every member of Congress to listen to Prime Minister Netanyahu, who probably knows more about this issue than any world leader, because it threatens the very existence of the nation state of the Jewish people.Congress has the right to disagree with the prime minister, but the idea that some members of Congress will not give him the courtesy of listening violates protocol and basic decency to a far greater extent than anything Mr. Netanyahu is accused of doing for having accepted an invitation from Congress.


He also reminds the reader that President Obama sent British Prime Minister Cameron to lobby members of Congress in dealing with the Iranian negotiations.  That move was clearly an intrusion into the separation of powers.  Separate but equal powers, according to the Constitution.  The man touted as a Constitutional Scholar conveniently ignores the document when it works to his advantage. It is the duty of both parties to listen to opposing views.

Before the speech, Speaker John Boehner released a video about the occasion and the details. Despite what the Democrats would have us believe, interest in attending the event was huge:


Prime Minister Netanyahu’s audience will include members of Congress from both parties, as well as guests in the gallery.  Speaker Boehner’s guests include former Speaker Newt Gingrich and Elie Wiesel, a recipient of the Nobel Peace Prize and the Congressional Gold Medal.·       Given the ties between America and Israel, it’s no surprise that interest in attending the speech is high.  We’ve had 10 times the number of requests for tickets than there are seats available in the gallery.  In fact, demand is so overwhelming that both the House and Senate have set up separate viewing locations, which are also ticketed events.

A list of those declaring their boycott of the speech beforehand was released.  It included the usual suspects - far left Democrats, Muslim American politicians, Black Caucus members - who are not normally aligned with Israel anyway.  How embarrassing for them that it all turned out so well. The speech was well received - rivaling any State of the Union address for the number of standing ovations and cheers from the audience - and Prime Minister Netanyahu made his case against an Iranian nuke deal in the first five minutes.  The rest of the time he reinforced his conclusions and rallied support for Israel, which was his purpose in the first place.

President Obama was for a no nukes policy with Iran before he was against it.  As noted in this brief history, Obama is unable, or unwilling, to show leadership against an ever increasing threat to Israel:

In June 2010 the administration pushed, and the U.N. Security Council adopted, Resolution 1929, which “demands” that “Iran halt all enrichment activities.” But now the administration will endorse Iran’s “right” to an industrial-scale enrichment capability—a right, incidentally, that the administration denies to South Korea.Resolution 1929 also states that Iran is “prohibited from undertaking any activity related to ballistic missiles.” But Iran continues to manufacture and test ballistic missiles, the Supreme Leader Ali Khamenei demands they be mass produced, and Iran’s top nuclear negotiator is adamant that “we are not ready to discuss this matter with any foreigner.” All of which gives the lie to weak State Department protestations that a deal will halt the ballistic missile program.In December 2013, Mr. Obama personally assured a pro-Israel audience in Washington that, when it came to diplomacy, “no deal is better than a bad deal.” Now unnamed administration officials are selling the line that “the alternative to not having a deal is losing inspections, and an Iran ever-closer to having the fissile material to manufacture a weapon.” In other words, virtually any deal is better than no deal.In March 2012, Mr. Obama insisted “my policy is not containment, my policy is to prevent them from getting a nuclear weapon.” He has said as much on some 20 other occasions. But the deal being contemplated now, with a sunset provision that will ultimately give Iran the right to enrich in whatever quantities and to whatever levels it wants, is neither prevention nor containment.

Despite what the doubting Democrats proclaimed, the speech was not about politics for Netanyahu, it was to state his opposition to a bad deal reported to be crafted together by Secretary of State Kerry and the Obama administration with Iran. Netanyahu is protecting his country when challenged.

“I deeply regret that some perceive my being here as political. That was never my intention,” he said. “I want to thank you, Democrats and Republicans, for your common support for Israel, year after year, decade after decade. I know that no matter on which side of the aisle you sit, you stand with Israel.”

Overall, Netanyahu avoided making his controversial speech more controversial, demonstrated that most of Congress is on his side, and left town without giving his U.S. critics inside and outside the administration new ammunition. It was a speech devoid of real news, but that was the Israeli prime minister's plan.

Most of all, Netanyahu accomplished what Obama has been unable to do - explain in very plain terms the dangers of a nuclear Iran and the threats to the survival of Israel.  Democrats should be ashamed of themselves.

Posted by Karen Townsend at 4:22 PM
Email ThisBlogThis!Share to TwitterShare to FacebookShare to Pinterest