What if This is The GOP's Big Tent Moment? 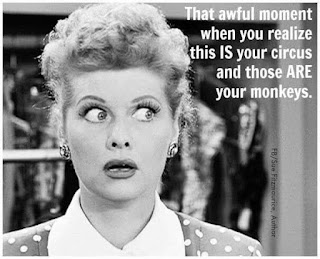 Donald J. Trump will be the Republican Party's presidential nominee at the completion of its national convention this summer. With the suspension of the Cruz campaign Tuesday night, a whole lot of drama is playing out on social media.  Politics ain't bean bag.

I get it, I really do.  I was depressed for days when Marco Rubio suspended his campaign on March 1.  He was the complete package.  He also had the highest favorability numbers in all the polls.  He was the most electable.  He had years of experience - from local to state to national government.  He has a penchant for foreign policy.  He is an extraordinary communicator.  I could go on, but in the meantime...

I feel you, my tribe. The anger and disappointment is everywhere.  With this election cycle, we have reached the tipping point.  Voters are no longer interested in political experience, policy points, electability, or frankly, a candidate you'd like to have a beer with.  Donald Trump checks none of those boxes. He has higher unfavorable numbers than Hillary Clinton. He is loud, crude, egotistic, vulgar. He holds none of the Republican principles I hold dear.  And the people can't get enough of him.

A massive re-alignment has been brewing for both parties for years. The two political parties? The voters are over them. A majority of voters now call themselves Independents.  It is increasingly difficult to recruit activists as candidates.  The absence of women in elected office in the Republican Party is particularly distressing to me. Lots of things have to change.

In a normal year, a more traditional Republican would be the nominee and the various factions would be going back and forth on whether that candidate would meet everyone's expectations.  No candidate ever does, of course, because people aren't all the same.  After decades as an active Republican, both publicly and privately, my idea of the best candidate may not be the same as yours. That is the beauty of a political party, though, and it is essential to embrace all those who would call themselves Republican voters in order to sustain and grow a party.  This lesson still hasn't been learned by enough people, it appears.

Ted Cruz thought he would be the outsider, though he has been in politics since the contentious 2000 election and the George W. Bush administration. Cruz thought his path to 1600 Pennsylvania Avenue was on the backs of Evangelical voters.  That didn't work either.  Donald Trump drew in voters who have never voted, voters who are union members, voters who are solid working class people - those who get up every day and actually do the work that keeps America going.  Trump even found some long lost Reagan Democrats.  Are you getting the picture?  This is what it takes for the Republican Party to win in November.  A very broad coalition of voters must get out and vote or Republicans don't win.  We start out behind the Eight Ball in the Electoral College map and in order for Republicans to win the presidency, states have to be won that are not traditionally in the R column.  And swing states are crucial.

Now, about those Independent voters - they don't care about parties. They vote for the candidate.  In this year's cycle, not only do we have a man who has never held elected office as the party's nominee, he is running against a Democrat woman who holds as high unfavorable numbers as him.  Plus, in her case, she may be facing federal indictment before the election rolls around.

It's too early yet to expect a big kumbiya moment with Republican and conservative leaning voters to hug it out and vow to work together for November victories.  Most Republicans will understand that getting out to vote and supporting down ballot candidates is so very important.  Think of the judicial candidates and party chairman races that depend on voter participation at the local level.  All politics is local.

The big tent has been erected.  We just didn't realize it would be by a Democrat who now calls himself a Republican.  If Trump had held an R next to his name for years, though, he would be embraced by the same people now declaring they cannot possibly vote for him in November.  They would find a way to hold their noses and vote for him, just as some in the party always have to do with our nominees.  I've done it. There is no perfect candidate who pleases everybody.  Some conservative leaning voters aren't able to look at the bigger picture or even look down the road a bit.  I understand that.  Most voters aren't political nerds - policy papers, campaign strategy, candidate recruitment and C-SPAN don't interest them. There is no passion.  Some just show up on election day and vote.  That's the most important part.

Do not succumb to the ugliness of mocking and name calling now seen on social media towards Trump voters.  Americans are free to support any candidate.  It is the job of each candidate to win over voters. I know you have reasoned with people in your life who declared there was no way they could vote for this person or that one. It's happened to all of us - maybe it's been us. In today's culture, which Republicans have failed miserably to embrace or even try to understand, this Trump guy gets all the media attention and everyone knows him.  Chances are, you, too have a family member or friend who is a Trump voter in their state primary or caucus.  They aren't less intelligent or uneducated.  They are doing what we have asked them to do all along - get out and vote, preferably for a Republican candidate. They just don't want another politician as the candidate.

Trump is a master marketer. It is his super power.  The challenge is this - does the Republican Party embrace his enthusiastic voters and those newly interested in politics as it relates to them or do we brush them aside and continue to fade into the sunset? Those of you who sat out the last two presidential elections because you were unable to bring yourself to vote for a John McCain or a Mitt Romney, as they didn't pass your political purity test - well, that is how we ended up with Barack Obama. How's that worked out for you? When I have moments of weakness, two words come into my mind - Supreme Court.  That's all I need.


Posted by Karen Townsend at 8:25 AM
Email ThisBlogThis!Share to TwitterShare to FacebookShare to Pinterest