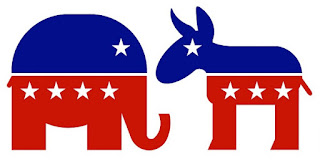 Ready for the debates between the presidential nominees? Maybe you are more interested in the debate scheduled for the vice-presidential candidate. Either way, here is the info:

"Journalists from NBC, ABC, CNN and Fox News will moderate the three scheduled debates between U.S. presidential candidates Hillary Clinton and Donald Trump ahead of the Nov. 8 election, the nonpartisan group organizing the events said on Friday.


NBC anchor Lester Holt will ask questions at the first debate on Sept. 26 in New York, while ABC global affairs correspondent Martha Raddatz and CNN anchor Anderson Cooper will co-moderate the Oct. 9 "town meeting" style debate in St. Louis, the Commission on Presidential Debates said.
Fox News anchor Chris Wallace will moderate on Oct. 19 in Las Vegas, it said in a statement.
CBS journalist Elaine Quijano will moderate the single vice presidential debate on Oct. 4 between Republican Indiana Governor Mike Pence and his Democratic rival, U.S. Senator Tim Kaine of Virginia, the commission said.
C-SPAN's Steve Scully will be a back-up moderator for all four of the debates, it added."
New York, St. Louis and Las Vegas. You may have also noticed that the only shot at a somewhat balanced moderator is Chris Wallace. Sadly, this is what Republicans have come to expect. Is it any wonder that finally Republicans are demanding better from those who make these decisions?
Posted by Karen Townsend at 2:50 PM
Email ThisBlogThis!Share to TwitterShare to FacebookShare to Pinterest