The featured speaker for the September general meeting of Memorial West Republican Women PAC was Jacquie Baly.  Those of us in attendance were treated to a talk presented by a happy warrior.  It was a joy to listen to Ms Baly talk about Republican philosophy as it relates to women and the younger generation. 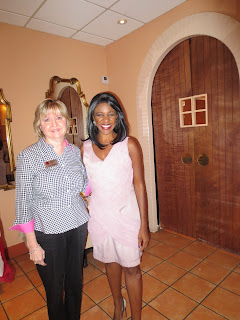 
Ms Baly is a successful woman.  She is a very active working mom to two sons as well as a small business owner.  She is an adjunct professor at the University of Houston, teaching public policy in the Political Science Department.  She is the conservative voice for the local Fox affiliate weekly Sunday morning show political panel. She is an enthusiastic member of Team Abbott, working for the election of Texas Attorney General Greg Abbott for Governor.

A native of St. Croix, U.S. Virgin Islands, she spoke of going to college at age seventeen and discovering that the university world is indeed a very liberal one.  She spoke of going to work at University of Houston as a professor and finding a dart board with Tom DeLay's - her neighbor and friend - face in the target. Though she voiced her disapproval to her colleagues, it was to no avail.

She spoke of the need to deliver the Republican message to young people, especially young women.  Where the Republican party loses young people is when harsh messages are put out there on social issues.  We must work harder to speak of inclusion, not exclusion, which does not mean we change personal beliefs but that we show respect for others.

She spoke of the lack of knowledge by so many of today's black voters and the history of black people and the Republican party. That history has to be re-introduced to voters and, again, welcome in those voters not pursued by Republicans in recent elections.

Ms Baly delivers her message with joy in her voice.  Hers is a smiling face and her manner is open and friendly.  She is someone who represents the best of the Republican party and Republican women.  We are grateful she is on our side.

Posted by Karen Townsend at 1:56 PM
Email ThisBlogThis!Share to TwitterShare to FacebookShare to Pinterest

For most of my adult life, I have struggled with identifying with a party because I couldn't (and often times still can't) understand why there has to be the "party line" mentality. Just because I don't agree on some topics, doesn't mean we can't agree on other topics and work together. Even within the republican party this is an issues, which becomes very hostile and defensive. As a result, as a younger person, I have struggled with this idea of "all or nothing" kind of thinking with politics. It's very alienating. Nevertheless, when I moved to Texas, I registered as a republican because at my core, I am a conservative. I am pleased to see the movement in the party over the past few months as they rebrand and welcome new voices into the party. I am one of those millennial women that is now focused on helping move the Republican Party in a direction that is in alignment with their actual values: freedom, opportunity, and empowerment.