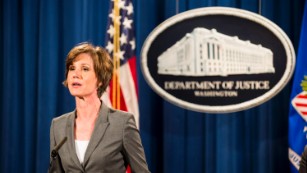 I don't know about you but I am thrilled that President Trump took swift action and fired the acting Attorney General, a Deputy Attorney General under former President Barack Obama, Sally Q. Yates. Yates decided to make a political statement instead of doing her job - to defend the president's executive order on the travel ban. She made a statement that she didn't think it was legal. Trump rightly said her statement was a betrayal and fired her.

Yates had agreed to stay on with the Trump administration and act as Attorney General until the confirmation of Trump's pick, Alabama Senator Jeff Sessions. You may remember how deeply politicized the office of Attorney General became in the Obama administration led by Democrat ideologue Eric Holder. Continuing on in this hyper-partisan atmosphere, Yates decided that not only would she defy the president, she would make her opinion known that she didn't agree with the policy put forward by Trump. She's a career prosecutor, not a policymaker. She deserved to be let go. From the New York Times:


Ms. Yates said her determination in deciding not to defend the order was broader, however, and included questions not only about the order’s lawfulness, but also whether it was a “wise or just” policy. She also alluded to unspecified statements the White House had made before signing the order, which she factored into her review.

The order had, in fact, been deemed legal by the Justice Department's Office of Legal Counsel. The office signed off on it. Yates gave no reason why she thought it was illegal.


Who is Sally Q. Yates? She is a career prosecutor from Georgia appointed to be U.S. Attorney for the Northern District of Georgia by Obama. Confirmed in 2010 by the U.S. Senate. In 2015, she was confirmed by a vote of 84-12 by the Senate as Deputy Attorney General. She served under former Attorney General Loretta Lynch in this capacity.  "In 2015, she authored the policy, known as the "Yates memo" prioritizing the prosecution of executives for corporate crimes.12][13]"

Yates' bio has been removed from the Justice Department's office website and her replacement has been sworn in. Dana Boente, the US attorney for the Eastern District of Virginia, will serve as acting Attorney General until Senator Sessions is confirmed. Boente is best known for leading the corruption trial of former Virginia Governor Bob McDonnell. Boente was sworn in at 9:00 PM Monday night and immediately rescinded Yates' order, instructing DOJ lawyers to "defend the lawful orders of our President."

This action was perfectly legit for Trump to make. There is precedent for sweeping changes to be made at the Justice Department as new administrations come in. You may remember that former President Bill Clinton fired all 93 U.S. Attorneys, for example, as he came into office. None of this would have happened if the Democrats had not decided to hold up the confirmation vote for Sessions in the Senate. Monday's actions have now spurred on his vote, so that is a good thing. Obstructing the vote on Sessions is part of the Democrats' strategy - vote down Trump's nominees and drag out the confirmation process as long as possible. It should be noted that on his first day in office, Obama had seven of his cabinet nominees confirmed by the Senate. Trump had two. Senate Minority Leader Chuck (fake tears) Schumer has declared he will seek a delay in "just about every one" of Trump's nominees.


Posted by Karen Townsend at 9:09 AM
Email ThisBlogThis!Share to TwitterShare to FacebookShare to Pinterest

Hiya! I simply want to give a huge thumbs up for the great info you’ve here on this post. I will probably be coming again to your weblog for more soon. 토토

I am extremely impressed with your writing skills and also with the layout on your weblog. keep up the excellent quality writing. 경마

This blog was…great! how do you say it? Relevant!! Finally I’ve found something that helped me. Thanks! 경마사이트

Everything is very open with a clear clarification of the issues. It was really informative. Your site is extremely helpful. Thanks for sharing! 사설토토