Whoopi Goldberg to Carryn Owens: You're Just Looking for Attention 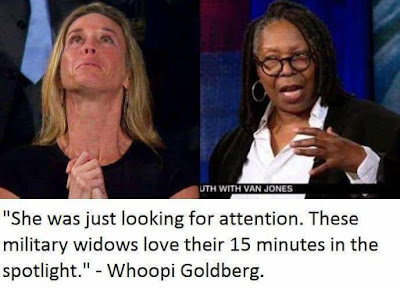 This is today's hideous left. Celebrities and liberal political pundits could not wait to appear on talk shows to criticize this SEAL's widow. Carryn Owens' pain and grief was impossible to not feel as she rose upon recognition from President Trump during his Joint Address to Congress Tuesday night. The level of Trump Derangement Syndrome so early into the president's first term is palpable.

Bitter Hillary Clinton supporter Whoopi Goldberg is not alone in her smear of the grieving widow. As regular, decent, patriotic Americans felt tears welling in their own eyes, the likes of Michael Moore, Bill Maher, were jotting down outrageously cruel statements that would garner notice from their pals in the media after President Trump's speech. The speech was overwhelmingly well accepted and praised by the majority of people on both sides of the aisle so the far left went on the defense.

Ultra left filmmaker Rob Reiner said, “It was cringe-worthy ... talk about using someone as a prop. It was disgraceful.”

Hillary Clinton volunteer Dan Grilo: “Sorry, Owens' wife, you're not helping yourself or your husband's memory by standing there and clapping like an idiot. Trump just used you.” Then the coward apologized and deleted his Twitter account.

On MSNBC's Hardball Bill Maher said, "I wasn't crazy about the response to that," Maher said. "I wish she hadn't allowed herself to be used as his prop like that.
"And I don't see any great courage here. Where is the courage? Who wouldn't stand and applaud for a war widow?" What he didn't bother noting was the fact that House Minority Leader Nancy Pelosi and DNC deputy chairman Rep. Keith Ellison didn't stand for Mrs. Owens. They were not alone in their hideous partisanship towards a grieving widow.


"Michael Moore echoed Maher's statements, saying Owens' death was the "result of a dinner Trump had with his son-in-law and a political hack," referring to Jared Kushner and Steve Bannon." (Except the raid was planned by Obama and his people and left for the new administration, due to conditions at night when the raid would take place.) "That’s why she's there, as sort of an 'f-you' to the people who are criticizing him for this," Moore said. "And this poor woman, this widow who has lost her husband, she is in desperate grief right now. "And to use that to put another notch on his belt -- and what is he thinking about? 'My ratings. Record Applause. I'm going to get an Emmy for this, most applause for a dead soldier on my watch!'""This is the sickness of this man," Moore concluded.

You get the picture. The left and their willing allies - the #NeverTrump hold-outs - are so Trump deranged just 5 weeks into his administration that Hollywood can not even show some human decency to a 36 year old war widow. Democrat politicians acting like they have lost their minds are simply a reflection of their voters.


Posted by Karen Townsend at 4:31 PM
Email ThisBlogThis!Share to TwitterShare to FacebookShare to Pinterest