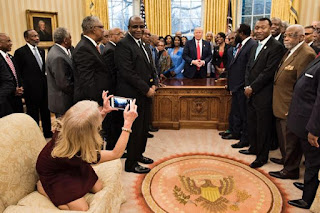 This is where we are, America. President Trump's counselor, Kellyanne Conway, caused a sustained meltdown on social media Monday after photos appeared showing her feet on a
sofa in the Oval Office. The Trump deranged have sunk to this level of criticism and others connected on the Internet play along.

Never mind that Conway was taking a photo of a large crowd of black pastors and religious leaders gathered with the president and her rather indelicate position was one on her knees, balancing for the best angle. The kicker? SHE KEPT HER SHOES ON!! The horror. From what I could see, she did no damage to the sofa's upholstery but let's all get indignant.

Can we all just take a breath and get a grip already? President Trump was signing an Executive Order concerning historically black colleges and universities. The group was gathered with him to witness that moment.

"White House Initiative on Historically Black Colleges and Universities, which was previously part of the Department of Education, back to the White House."

I read comments ranging from outrage at the lack of decorum in the Oval Office - then rational people posted photos of former President Obama resting with his shoed feet on his desk and the coffee table in that office for comparison - to phony prudish snark about a woman on her knees in a dress among a room full of men. The only thing missing was a racist component to note that she's a blonde white woman and they were black men.

The 24/7 level of continual outrage has produced a whole new level of irrational press coverage and social media commentary. How long this can be sustained remains to be seen. 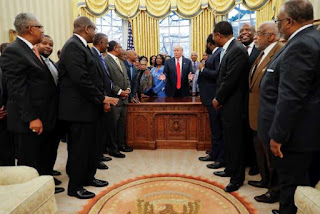 Posted by Karen Townsend at 11:18 AM
Email ThisBlogThis!Share to TwitterShare to FacebookShare to Pinterest

I didn't lose my mind but another angle showed she had her shoes on. Ugh!!!