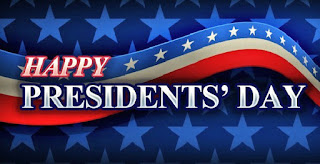 Happy Presidents Day! If, like me, you have been following along with the opposition to the current President's first term in office you may find yourself shaking your head in disbelief. Or maybe, like me, you understand there are a whole lot of displaced and confused folks out there who have lived large on either political party and now find themselves displaced. Maybe not so much that it has hit their bank account or opportunity to write a column or bloviating on television, but it has punched egos and brought about a loss of feeling powerful. Feeling important. Feeling smart.

Welcome to 2017. It's a whole new political world out there. Just as I absolutely know that the 2016 presidential election was a binary choice (despite the best arguments from voters not willing to stop Hillary Clinton's ascension to the Oval Office), I know that those now displaced are having a tough time finding a way to support the new order in Washington, D.C. Now is a time of prime opportunity for advancement of Republican policy and ideas yet some are too mired down in personal feelings to understand that. Just like Democrats, they are feelings-driven and lacking in a larger vision of what is possible. How sad for them.

If you, like me, find yourself checking in on social media throughout the day or evening, you know what a challenge it can be to tune out the anger and ugliness of the displaced. Conservative leaning voters and operatives now align fully with the leftists who cannot go for one day without ugly tweets or Facebook posts either wishing ill of people hoping for a successful presidency or going a step further and cheering for impeachment. What is lost is the fact that if this president is successful in office, all of America wins. And you will never win another person over to your side of an argument by belittling their intelligence, name calling, or other nastiness. Dismissing another's opinion keeps you in a bubble and unable to hear what the other side is saying. Why not arm yourself with the whole picture?

This longtime lefty columnist for the New York Times writes that even though the president has substantial support, it is time to use Section 4 of the 25th Amendment, though it has never been done before. Yes. This is the rational of the opposition to a GOP controlled Congress and White House. If you read this op-ed, you will see he asks the opinion of longtime lefty law professor, Laurence Tribe, who goes on to call the president's cabinet as "bizarre." Hmm. Sounds like Tribe make my argument - I assume the cabinet is bizarre in Tribe's world because it is generously composed of business people. You know, the people who have met payrolls and answered to stockholders. Unlike career government employees, they know a thing or two about accountability. In Tribe's world, this president is unstable and unfit to govern.

This odd piece is written as though the author is surprised that the president has lived through a month in the office. No doubt she is quite sad. It's sick.

And the "Not My President" rallies - predictable. As I've written about, a well-funded and well-organized has been grown on the left (and their willing allies on the conservative side) to protest as often as possible. Often these rallies turn violent and destructive. It is not organic - many are paid, professional agitators and political groups looking to raise money - and it is not like the Tea Party. The dinosaur networks and media are only too happy to do wall to wall coverage of these rallies, unlike Tea Party rallies in their infancy. The double standard is alive and well. CNN, for example, first nicknamed Clinton News Network is now 24/7 anti-Trump panels and stories.

Today marks the one month point in this new presidency. One month. Before this man was even raised his hand and repeated the words as directed from Chief Justice John Roberts on Inauguration Day, leftist political pundits and protest signs called for his impeachment. Those that claim that this president is shredding the Constitution clearly could use a refresher course themselves. Self-awareness is hard.

Conservatives in social media used to criticize other conservatives for re-tweeting 140 characters from leftists on Twitter or re-posting a Facebook post yet now this is exactly what they do. You may also notice the hypocrisy in their demand for conservative purism as they align so easily with the left now. The unintended consequence of the continual criticism is this - those who voted for the current President because of being aware of what a disaster Hillary Clinton would be for a conservative agenda and for appointments to the Supreme Court - not the ardent fans of Trump - now feel obligated to defend Trump from the media and #NeverTrump people. Also, the critics are being tuned out, not listened to. We will see how this all plays out in 2018.

In the presidential primary, I was #NeverTrump. In the general election, I was #NeverHillary. It was a binary choice. I'll take Republican leadership over Democrat rule any day.


Posted by Karen Townsend at 4:21 PM
Email ThisBlogThis!Share to TwitterShare to FacebookShare to Pinterest

Managed Network Services gives you access to a wider pool of experts to help manage your growing business network needs. It provides proactive support to ensure issues are fixed in a timely manner and offers improved IT security to help protect your customers and employees. It also simplifies your cost management, resulting in a more productive and cost-effective business.

Managed Network Services gives you access to a wider pool of experts to help manage your growing business network needs. It provides proactive support to ensure issues are fixed in a timely manner and offers improved IT security to help protect your customers and employees. It also simplifies your cost management, resulting in a more productive and cost-effective business.