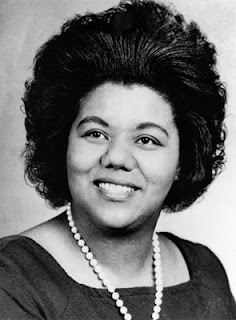 Born in 1938 in Mississippi, Katie Hall - then Katie Green - was brought into a world that did not allow her to cast a vote because of the color of her skin. She did, however, go to college and receive her degree from Mississippi Valley State University in 1960 and then a MS degree from Indiana University. She became a teacher, teaching social studies in Gary, Indiana.

She became active in Indiana state politics. She was elected to office in the state legislature. From that, she ran for the seat in the House of Representatives when the opportunity presented itself.

Hall was not supportive of the Reagan agenda. She did not set herself above standard voting along party lines.
Representative Hall voted with the Democratic majority against much of the Ronald W. Reagan administration’s legislative agenda, focusing on education, labor, and women’s issues. In addition, Congresswoman Hall became involved in the fight to alleviate famine in Africa when, during a congressional trip to northern Ethiopia, she was moved by the widespread suffering she witnessed. Hall also supported a variety of measures designed to reduce her urban and industrial district’s high rate of unemployment and to mitigate the attendant social problems: crime, family debt and bankruptcy, and alcohol and drug abuse. As a member of the House Steel Caucus, Hall endorsed the Fair Trade in Steel Act, which was intended to revitalize Gary’s ailing steel industry.

Fiscal conservatives were not in favor of such a bill due to the expense of a federal holiday. Recognition of King's birthday as a federal holiday had been attempted since 1968, the year of his assassination. Hall had a reputation as a good negotiator and was put in charge of moving the bill through her committee, the House Subcommittee on Census and Population. She succeeded using a bit of practical common sense.

The primary argument against the bill led by fiscal conservatives was the large cost of the holiday to the federal government, estimated at $18 million in holiday overtime pay and lost work time.10 Hall courted detractors by moving the holiday from a fixed date—King’s January 15 birthday—to the third Monday of January to prevent government offices from opening twice in one week, therefore saving money.

She only served the one term in Congress. Her career after politics did not end as well as it began.

After Congress, Hall continued to be active in Indiana Democratic politics. In 1986 and in 1990, she tried but failed to recapture the Democratic nomination in her old House district. Hall returned to Gary and served as the vice chair of the city’s housing board commissioners. Hall became the Gary city clerk in 1985. She resigned in January 2003, after pleading guilty to charges of federal mail fraud.
Posted by Karen Townsend at 8:57 AM
Email ThisBlogThis!Share to TwitterShare to FacebookShare to Pinterest