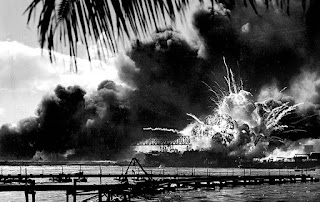 I have two lines of thought about this day in history.  I remember my mother telling me about the day from her memories as a young girl and the effects World War II had on her family.  I also have a memory of a college professor who shared the day with his class.

My mother remembered the day and how she learned of the attack by explaining to us,her daughters, that she was enjoying a movie matinee when the news broke to the audience.  I had an uncle who was so bitter over the war that he refused to buy products made in Japan.

My father-in-law served in the war in the northern Africa/Italy theatre. Like most of the Greatest Generation, he did not easily share his stories of the war, and he refused to visit Europe in his later life as his wife did on vacations.

In college, my Freshman Philosophy professor was Japanese.  He invited the class to his home, just off campus, for sake and conversation on December 7th.  I clearly remember that social event to this day and also how difficult it was to listen to his lectures in class as his accent was still so thick.

I wish that President Obama was a bit less self-absorbed and more inclined to physically attend events honoring our veterans, especially those of World War II and the Korean War, as our veterans are dying off so rapidly now.  Obama did finally tweet out recognition of the day and linked it to his standard presidential proclamation.  Maybe he had a pressing golf game because we know he is not doing his job  on figuring out a path to fiscal stability.

NATIONAL PEARL HARBOR REMEMBRANCE DAY, 2012
- - - - - - -
BY THE PRESIDENT OF THE UNITED STATES OF AMERICA
A PROCLAMATION
On December 7, 1941, our Nation suffered one of the most devastating attacks ever to befall the American people. In less than 2 hours, the bombs that rained on Pearl Harbor robbed thousands of men, women, and children of their lives; in little more than a day, our country was thrust into the greatest conflict the world had ever known. We mark this anniversary by honoring the patriots who perished more than seven decades ago, extending our thoughts and prayers to the loved ones they left behind, and showing our gratitude to a generation of service members who carried our Nation through some of the 20th century's darkest moments.
In his address to the Congress, President Franklin D. Roosevelt affirmed that "with confidence in our Armed Forces -- with the unbounding determination of our people -- we will gain the inevitable triumph." Millions stood up and shipped out to meet that call to service, fighting heroically on Europe's distant shores and pressing island by island across the Pacific. Millions more carried out the fight in factories and shipyards here at home, building the arsenal of democracy that propelled America to the victory President Roosevelt foresaw. On every front, we faced down impossible odds -- and out of the ashes of conflict, America rose more prepared than ever to meet the challenges of the day, sure that there was no trial we could not overcome.
Today, we pay solemn tribute to America's sons and daughters who made the ultimate sacrifice at Oahu. As we do, let us also reaffirm that their legacy will always burn bright -- whether in the memory of those who knew them, the spirit of service that guides our men and women in uniform today, or the heart of the country they kept strong and free.
The Congress, by Public Law 103-308, as amended, has designated December 7 of each year as "National Pearl Harbor Remembrance Day."
NOW, THEREFORE, I, BARACK OBAMA, President of the United States of America, do hereby proclaim December 7, 2012, as National Pearl Harbor Remembrance Day. I encourage all Americans to observe this solemn day of remembrance and to honor our military, past and present, with appropriate ceremonies and activities. I urge all Federal agencies and interested organizations, groups, and individuals to fly the flag of the United States at half-staff this December 7 in honor of those American patriots who died as a result of their service at Pearl Harbor.
IN WITNESS WHEREOF, I have hereunto set my hand this sixth day of December, in the year of our Lord two thousand twelve, and of the Independence of the United States of America the two hundred and thirty-seventh.
BARACK OBAMA
Posted by Karen Townsend at 4:25 PM
Email ThisBlogThis!Share to TwitterShare to FacebookShare to Pinterest