Wendy Davis Continues on Path to Race for Governor

I haven't written an update on the activities of Battleground Texas in a while, so I would like you to know that an email landed in my inbox today that to tell me that free Wendy Davis for governor bumper stickers are available now.  I'll pass, thanks, but no doubt automobiles will soon be sporting these all across the state.

Texas State Senator Wendy Davis is quite the darling of the left these days.  After her big splash into the national spotlight as the heroine in the Democrats' fight for late term infanticide in the state capitol, she's been the guest speaker at the National Press Club on August 5, 2013:

She has a song about herself.

She has been fundraising around the country.

Davis raised more than $933,000 in the final two weeks of June, a recent Texas Ethics Commission report shows.About one-third of that money came from outside the state, according to the Texas Tribune.

She will need every dollar, as her most watched opponent is current Texas Attorney General Greg Abbot.

She's even landed in the pages of Vogue Magazine.

Davis is the subject of an extensive profile in Vogue’s September issue. In the piece, Davis recalls her memories of her absent father, her first jobs and her stark first wedding. While the woman that appears in the folds of the year’s most highly anticipated fashion issue is poised, polished and politically viable, Davis alludes to her pre-political self, a woman with untamable frizzy hair, with humor.

The woman who is launching a run at the governor's office in Texas with an eleven hour filibuster over abortion law and clinic regulations is now being touted as a "cool mom".  Ok, then.

As has been pointed out by a liberal blog, Senator Davis looks a bit different than she did in her Harvard Law School days - here's her photo as she entered the halls of the Ivy League at age 27: 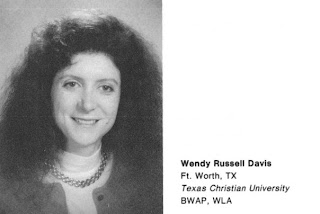 She is to be the closing speaker at the Women Donors Network conference in San Antonio in November.  From now until then she will continue gathering steam with the help of OFA-based Battleground Texas and the national Democrats.  Money will be raised.  She is expected to make her decision formal around Labor Day but most signs point to a certain jump into the race for governor.


Posted by Karen Townsend at 4:04 PM
Email ThisBlogThis!Share to TwitterShare to FacebookShare to Pinterest

It is too bad that conservatives are not organized. Wendy Davis is a one-issue baby killing candidate and should be easy to defeat. Unfortunately conservatives will sit back and watch the GOP make mistake after mistake. Joe Straus isn't a mistake?

Conservatives need to become organized, town by town, county by county with an umbrella organization in Austin.

If every conservative who cared, or says they cared, spent a few hours a month volunteering and $20 a year we could have a real powerful organization in this state.