No New Oil and Gas Drilling Under Obama's Reign

This was released by the House Natural Resources Committee concerning the end of new oil and gas drilling for a five year period, as imposed by the Obama administration:

After imposing a nearly three-year moratorium on new offshore drilling, the Obama Administration announced a draft plan this week that closes the majority of the Outer Continental Shelf (OCS) to new energy production through 2017. The draft five-year plan prohibits new offshore energy development and only allows lease sales to occur in areas that are already open. The draft plan places portions of Alaska and the entire Atlantic and Pacific Coasts off-limits to new energy production and job creation. "The Obama Administration's draft plan places some of the most promising energy resources in the world off-limits... No new drilling or new lease sales will occur during President Obama's term in office - despite the overwhelming support of the American people for new offshore energy production. The President's plan is to simply say 'no' to new energy production and 'no' to new American jobs created by new offshore drilling. It's a plan that is sending American jobs overseas, forfeiting new revenue, and denying access to American energy that would lessen our dependence on hostile Middle Eastern oil," said Chairman Doc Hastings. Next week, the Committee will hear from Interior Secretary Ken Salazar on this draft plan and other energy-related concerns at an oversight hearing on "The Future of U.S. Oil and Natural Gas Development on Federal Lands and Waters."

Let's think. Why would Team Obama use a five year plan? Would it be because that would be the length of time for Obama's reign as President of the U.S., should he win re-election? Why, yes it would. How convenient to the man so beholden to the powerful environmental lobby in our country.

Oil workers aren't unionized, so they must be eliminated. I have written often of the determination of this administration to destroy the domestic oil and gas industry and how ruthless they are in pursuing that goal. 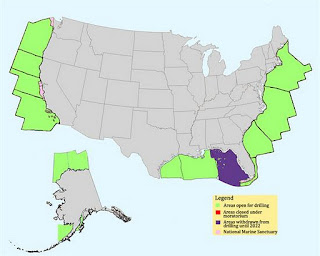 After the proposed 5 year ban: 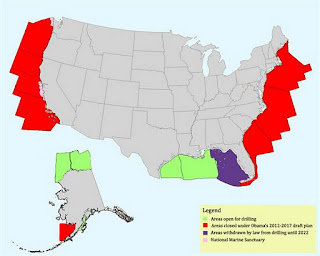 Clear?
Posted by Karen Townsend at 12:32 PM
Email ThisBlogThis!Share to TwitterShare to FacebookShare to Pinterest