Today We Are All Bostonians 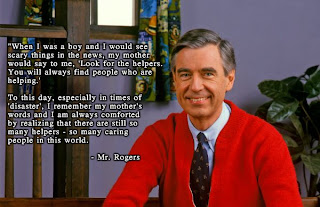 As it turns out, that little nagging voice in the back of our heads that reminds us to be ever vigilant as large crowds of Americans gather on beautiful, sunny days for something as normal as a big city marathon is still necessary. All of us who lived through the terrorist attacks of 9/11/01 have tried to quiet that voice as time goes on yet deep down we know we can not.

I didn't watch Mr. Rogers as a child - I was a Captain Kangaroo girl - but these are comforting words as we reflect on the terrorist attack on those in the Back Bay area of Boston Monday afternoon. I have seen this used on Facebook and in other pieces and it serves as a common touchstone.

It is hard for most of us to imagine what would allow a person to think that carrying out a terrorist action on so many innocent people in the middle of a major American city was the answer to anything.  We are a big-hearted, love your neighbor kind of country. There were runners from all over the world enjoying the friendly competition of a top tier athletic marathon.  Yet evil does exist and that reminder is crystal clear today.

I learned of the bombings on Twitter, as I kept an eye on my timeline. I was going about normal daily chores and projects. As I turned on cable news to find out what was going on, I was again awe struck by the sight of first responders and others on the scene running towards the smoke and the bodies on the ground.  The bombs exploded at the Finish line and the streets were crowded with families and friends of those running the race.  The day is known as Patriots Day in Boston and held as a local holiday.

I adore Boston.  My last time there was with my son, the summer before he entered high school.  We both love American history and that city is a gold mine for historical reference.  We enjoyed a trip to the New England Aquarium and stayed at a hotel in Back Bay just down from the famous spot honoring the original Tea Party.  We created a lot of great memories from that trip.

The first responders, both professional and civilian, were quick and they were everywhere. They are the best of humanity.  The worst of humanity was the instant politicial nastiness of the tragedy.  In no time at all, the extremes in both sides of politics were at it on social media.  Both sides were pushing their ideological agendas.  Whether it was the onset of conspiracy theorists or hatred for the Tea Party crowd, it was sickening.  The fact that it was April 15th - Tax Day, and also reminders of the Oklahoma City bombing and Waco, too - brought out the worst in speculation.

As of now, the killer has not been apprehended.  There are no answers yet.

Here are some excerpts released by Senator John Cornyn's office from a speech delivered by him on the Senate floor:


“Yesterday afternoon, we were reminded that America faces determined enemies willing to engage in barbaric acts against innocent civilians, men, women, and children. “We still don't know who is responsible for this terrible atrocity, but we do know that the people of Boston responded to this attack with courage and compassion. As the smoke rose, the American people saw their fellow citizens running toward, not away, but toward, the scene of the blast. “In fact, in the immediate aftermath of the bombings, so many people rushed to donate blood that the Red Cross literally had to turn them away. “Our response to this attack must be firm and unequivocal.  We must send a clear message that we will never compromise our value or our freedom in the face of terrorist violence. We must stay on the offensive against the enemies of civilization and remain vigilant in our day-to-day lives. The victims of Boston deserve nothing less.”

We are a big and free nation.  It's good to remember that expression used by homeland security people: If you see something, say something.  The evil isn't going away.

Posted by Karen Townsend at 12:11 PM
Email ThisBlogThis!Share to TwitterShare to FacebookShare to Pinterest