The 2010 Census report data has been released.

The U.S. Census Bureau announced today that the 2010 Census showed the resident population of the United States on April 1, 2010, was 308,745,538. That number reflects a noteworthy drop in normal population increase. The population increase was 9.7%. That is the slowest population growth since the decade of the Great Depression. One reason may be the deep recession during the last of the past decade. Illegal immigrants returned home and those considering immigration remained in their home country.

The trend is population movement going south and west. For the first time, the West is more populous than the Midwest, according to 2010 census figures. 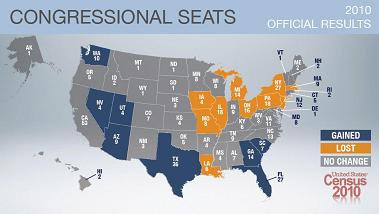 The census is a constitutionally required exercise.

“As you know the constitutional purpose of the census is the redistribution of the membership of the House of Representatives across states proportional to the population,” continued Groves. “Since 1940 the law has specified that the Census Bureau use the method of equal proportions to assign seats to the states.”

By law, illegal immigrants are counted. This has an effect on the outcome, including producing districts with more than half of the voting age residents ineligible to actually vote.

Several states with large immigration populations, both legal and illegal, will gain at least one seat out of the latest census numbers. They include Florida, Texas, Arizona and Nevada. South Carolina, Georgia and Washington state, which all saw unusually high rates of growth in their immigrant populations over the past decade, will also gain a congressional seat each. South Carolina, for instance, registered a 150 percent increase in its immigrant population, according to a CIS analysis.
Posted by Karen Townsend at 2:17 AM
Email ThisBlogThis!Share to TwitterShare to FacebookShare to Pinterest