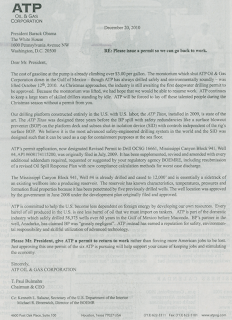 When will Americans and especially those in the profession of journalism begin to ask some serious questions about our country's energy policies? When do we receive explanations of policies put into place wily-nily without rhyme or reason? When will American consumers insist on consistent common sense solutions to far-reaching decisions?

Oil and natural gas drilling policy making is more than just pie in the sky waxing on by activists concerned about the environment. It is small minded and short sighted to assume that those in the energy business do not think of anything but the actual acquisition of crude oil or natural gas.

It is hypocritical of the liberal environmental crowd to turn a blind eye to rising energy costs when in the past, President Bush and VP Cheney were under constant scrutiny of any rise at all at the gas pump.

As summarized by The Heritage Foundation:

President Obama knows energy prices are skyrocketing. The liberal mantra has long been to disincentive Americans from purchasing cheap fossil fuels, by driving costs up. Because the only way consumers will choose the vastly-more-expensive wind and solar alternatives is if all prices are high, rather than wait for the market to bring alternative prices down. This is a reckless and devastating way to make a point about global warming at the expense of American families.

Nearly no questions have been asked of President Obama by the media regarding: 1) his bungled response to the oil spill; 2) his unilateral policies that are creating higher home energy prices; 3) rising gas and oil prices; or 4) the de facto moratorium on domestic oil exploration. It’s time to start asking the White House some tough questions. A two year moratorium on accountability is long enough.

Why the slowdown on issuing permits? This administration's agenda is to push alternatives to fossil fuel energy at the expense of oil and natural gas drilling. Alternatives to oil and gas drilling are decades away from practical implementation. A constant energy policy is needed to maintain the supply of oil and gas as other methods are brought into use. So far this administration is simply immaturely denying an efficient process for permits.

No one wants sound safety practices more than those on the oil drilling rigs and their families. No company wants to be responsible for unsafe practices. To think otherwise is succumbing to blind ideology. Unfortunately, President Obama is a far left ideologue unable to move past that to common sense appraisal of the business.

Safety concerns for delaying permit issuance is difficult for industry leaders to understand with no major incident in shallow-water drilling since 1949 and only 15 barrels of oil spilled in blowouts during the last 15 years.

BOEMRE, the agency that issues offshore drilling permits, is enforcing new requirements for obtaining permits, but those requirements — such as the Interim Drilling Safety Rule — lack clarity for the industry as no one knows if those regulations will change. Also these new requirements lack an accompanying increase in BOEMRE staff to administer them, increasing the time needed to complete the permit review process.

Recently an open letter to President Obama was published in the Houston Chronicle. Written by ATP Oil and Gas Corporation Chairman and CEO T. Paul Bulmahn, it was a plea for President Obama to issue a permit pending since originally filed in July, 2009. According to the history of this permit request, the supplements, revisions and amendments have all been submitted as requested by the federal regulators. A revised Oil Spill Response Plan, now required, has also been submitted. The well is drilled and cased. This well location was approved in June, 2008.

The open letter to President Obama references the fact that ATP has been a member of the drilling community that has safely drilled 58,35 wells over 60 years in the Gulf of Mexico prior to the tragedy of the Macondo explosion and oil spill.

An interview with Bulmahn about the letter to Obama and the decisions he has been forced to make in light of the non-issuance of permits by Secretary Salazar's Department of the Interior can be found here.
Posted by Karen Townsend at 4:08 AM
Email ThisBlogThis!Share to TwitterShare to FacebookShare to Pinterest